All Collections
Playback: Dynamic Tracks App
Troubleshooting
Why am I receiving the "RAM Memory Warning" in Playback?

Why am I receiving the "RAM Memory Warning" in Playback?

Learn what the RAM warning means, and how to free up RAM on your iOS device for a smoother Playback performance. 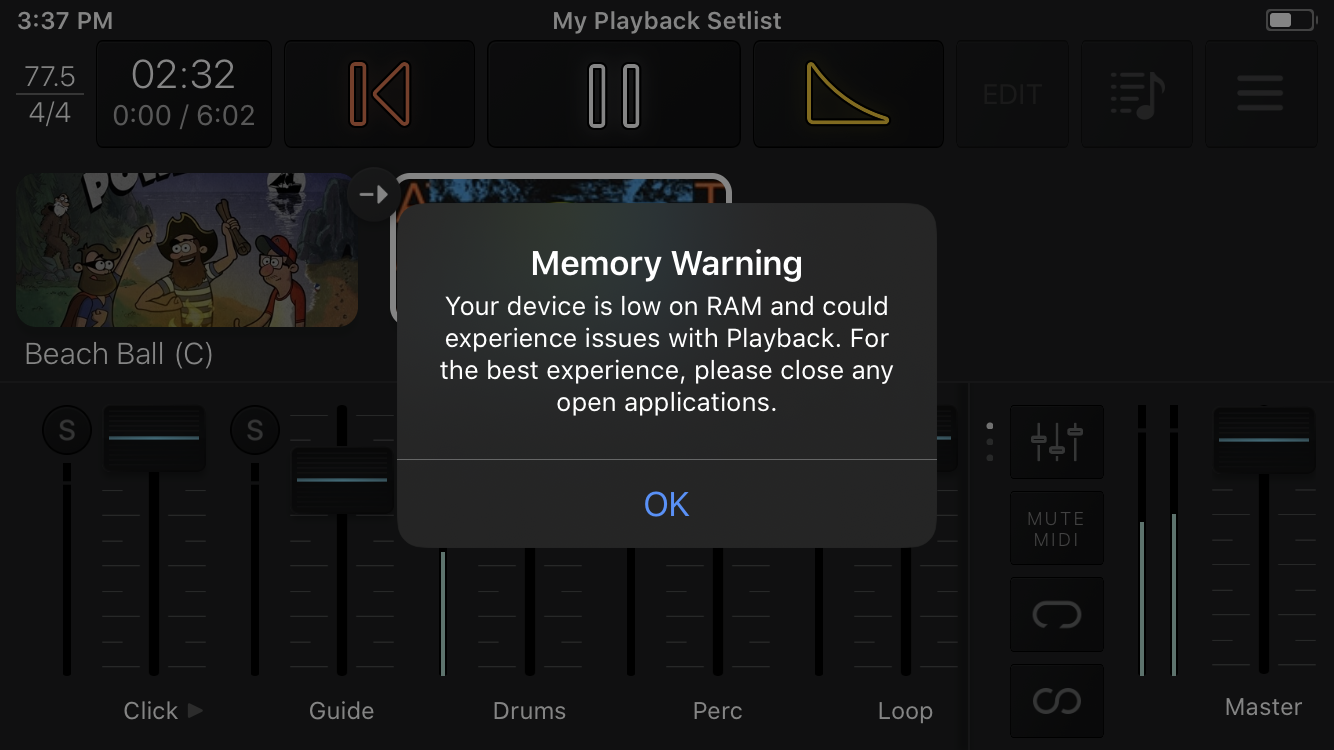 The RAM warning in Playback is shown when your iOS device is consuming heavy RAM. RAM (Random Access Memory) is the memory that electronic devices use to temporarily save data from apps so that they load and operate faster. When multiple apps and background tasks are running at once, your device’s RAM becomes overloaded, leaving less RAM to help Playback run smoothly. This makes your iOS device run slower overall.

Free Up RAM on iOS Devices

There are a few things you can do to clear RAM memory in your iOS device.

1. Hold the power button for 3 seconds until the shutdown screen appears

2. Release the power button, and hold down the home button until your login screen appears

3. Your device's RAM is cleared!

2. Press “Shut Down” in General settings, and use the the AssistiveTouch menu to hold down the home button until your login screen appears

3. Your device’s RAM is cleared!

If you continue to experience issues, please contact support and we'll be happy to help!

Macs and other computers also operate applications using RAM. While computer RAM storage is highly customizable and can vary from as little as 4 GBs of RAM to 32GB and higher, Playback requires a minimum of 4 GBs of installed RAM to operate smoothly.

Clear the PRAM and SMC

Note: This is an excerpt from an article found on TheNextWeb.com covering how to improve computer performance by clearing the Parameter RAM, as well as the System Management Control.

What is the PRAM? A computer's PRAM stores core settings such as disk cache and RAM disk. Resetting the PRAM can improve a computer's overall performance. Note: the PRAM also holds utility settings such as notifications sounds, sleep settings, and more. Check the above link for a full list of items stored in the PRAM.

What is the SMC? The SMC is only for Intel-based Macs and it stores/manages/controls hardware-related behavior such as the Fan, Lights, Power cycles, and System Performance.

For MacBook Pros, Airs, and MacBooks without removable battery

Note that you keep the power supply plugged in for MacBooks that have the built-in battery and out for MacBooks where you can pull the battery out.

For Mac Minis, Mac Pros, iMacs, and Xserves (really on a server?):